More recently, Shearer's work has taken a bold and decidedly experimental turn, combining ambient soundscapes and harmonic textures built on intuition rather than conforming to traditional pop structures. He has released two projects in the last month: an ambient solo guitar project called Morning Loops, and an ambient/ electronic music collaboration called LiBella with longtime collaborator Carmen Rizzo. He draws inspiration primarily from his mind's eye, but the BAE Hot Fuzz and 1272 Module are often close by as he dials in the various sounds he hears in his head, while exploring new frontiers on the guitar.

"I am trying to basically take away all the attack so you get these really long drones," Shearer explains. "So the guitar can sound like a cello, crystal bowls or vibes. It involves a lot of volume pedal and delicate finger work. I often graze the strings to create this kind of whispy texture." Then there is a lot of shaping and sculpting sounds with EQ, reverbs and delays spilling into a whole, creating almost infinite, harmonic tones and frequencies. "You get a few of these going, and they end up bouncing all over each other to create these beautiful, harmonic textures."

Stripping down the layers
Shearer recalls the catalyst that ultimately led him towards creating ambient music: "When I was doing session work on all these pop records, I would often get asked ‘Can you do a vibe track?’ - which sometimes meant making these paddy, ambient loops underneath the tracks — then bringing them in and out. Sometimes I would strip away the pop song and just listen to these things by themselves, and I remember feeling really moved by it. That led to my creating more of this so I could see where it would take me. And it has been really fulfilling."

Morning Loops is literally a stereo guitar track that Shearer laid down each morning for five days, with no edits. "I woke up, had my whole thing set up at home and just went to work. It was all done using the BAE 1272 module with no compression, ten-minute pieces." LiBella on the other hand, was done remotely by the two artists in collaboration, in almost a point, counterpoint kind of fashion as they exchanged sessions with the various compositional components. For the last several months — in many of these and other projects — the BAE Hot Fuzz has not only earned a space on Shearer's highly discriminating pedal board, but also on his desk.

In his 30 years of playing guitar, Shearer explains the evolution of his music making — and how it is taking him to a more 'centered' place: "The whole point of me exploring ambient and visceral music is because of the positive effect that music has on our bodies. Nowadays, there is noise everywhere we go, and my nervous system gets taxed," he explains. "You go into a restaurant and there are like 15 TVs on, everyone is on their iPhone and there is noise everywhere — it is an attack on the senses. Humans aren't designed for that, and it causes a lot of discord in our systems. So if I can create music that encourages inner peace and tranquility, it's a good thing."

Hot Fuzz: commanding artistic respect
"The thing about the Hot Fuzz is that it demands to be respected in a different way than just a regular guitar pedal because it is kind of big and has the reputation of the BAE Hi-Fi kind of thing behind it," he explains. "It feels like it would be demoted just to be on a pedal board, as it also deserves to be with the outboard gear too." Most of all though, the Hot Fuzz has found a place closer to Shearer's heart because of its capacity for sound sculpting: "For me, it is priceless to have a tool at hand with which I can sculpt new sounds — especially when I get loops going. I want to be able to turn knobs as I go, so I can really feel the different sonic textures I am creating."

"I look at the guitar as a very vocal instrument," Shearer continues. "There are so many different facets and ways to control the velocity, the attack and the decay because you are using your fingers and you can bend strings," he says. "You can play with a pick, you can play with your fingers, you can play with a nickel, whatever you want to strike the strings with. You can detune it or retune it. You can mic it acoustically, or put it through effects. It is such a versatile instrument, that I don’t feel that we have fully explored the sounds of what the guitar is capable of, and for me, the BAE stuff really helps bring this out into articulated vibrations and tones."

Serving the song
Shearer says that the Hot Fuzz has already carved its own niche in a sea of other pedals and fuzz boxes: "Fuzzes tend to have this sort of scrapey, top end heavy sound - almost like miniature electric shocks. That can be cool, but on this pedal, I can sculpt the bass and treble, the juice and the gain at will and get a warmer tone that fits better into a mix. Playing on records, this kind of sculpting is really important and serves a huge purpose in a song. So the Hot Fuzz is a very musical pedal in that sense. Sometimes it is not about the rad guitar part, it is about the right part for a song."

BAE has been with Shearer through thick and think, in every genre he's ever worked in: "I have been using my BAE gear forever, since my very first studio," Shearer concludes. "I had a pair of the BAE 1272s and it was my first experience with a high end module in my home studio. Now I have a more substantial studio and my BAE gear remains very solid, reliable, and always very 'Hi-Fi' sounding. With this stuff, you just plug it in and you’re ready to go." 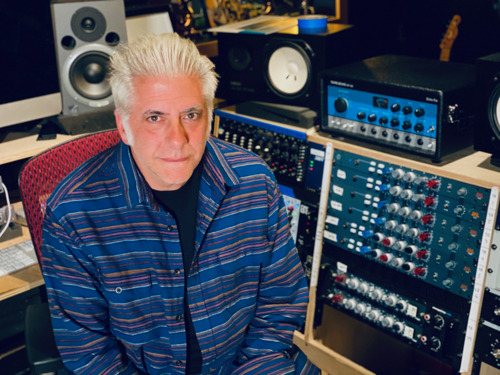